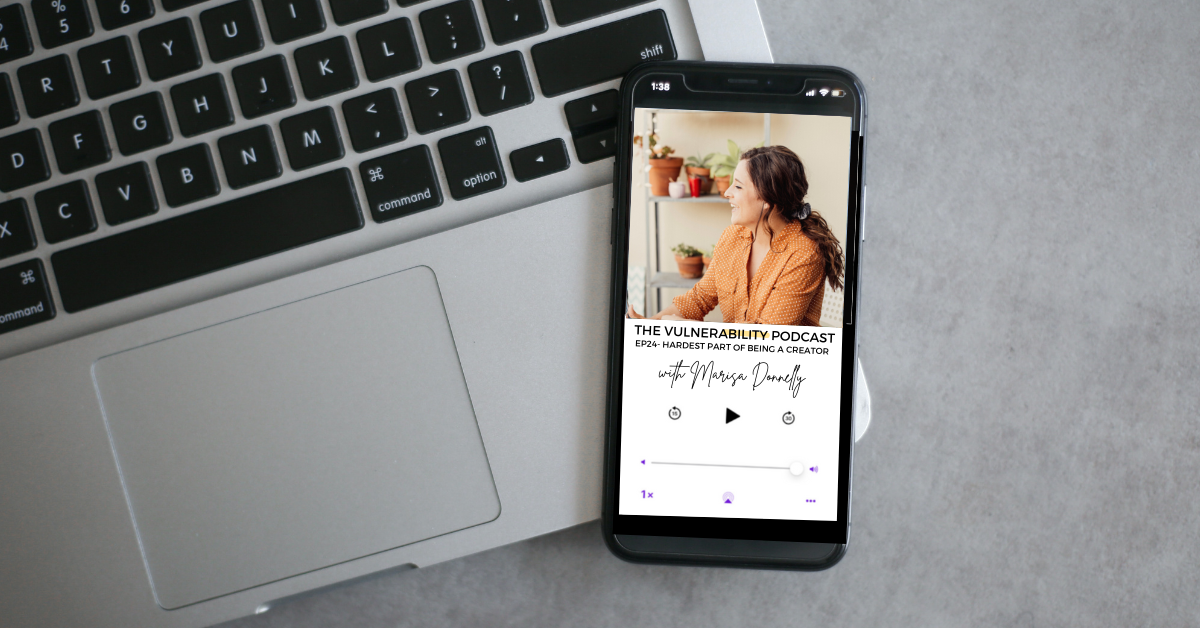 In Episode 24 of the VulnerABILITY Podcast, host Marisa Donnelly dives into what it really means to be a creator, entrepreneur, or business owner in a world that largely glorifies these occupations (and isn’t always truthful about them).

When I sat down to record this podcast, I had one goal in mind: be transparent about the *hard stuff.* My aim was to share the unfortunate truth that we’re always worried about what everyone else is doing, so much so, that we think everyone else is doing better. We’re constantly looking outside ourselves for validation when truthfully, everyone’s path is different.

In this episode, I share my experience building my business, Be A Light Collective and what it has really entailed. I also talk about my constant struggle to find balance and self-discipline.

[1:40] “We glorify different careers, different lifestyle choices so much… We’ve become a culture that’s so obsessed with comparisons and looking at what everybody else is doing and having as sort of a ‘benchmark’ of our own success.”

[2:30] “It’s human to fall victim to comparison… It’s one of the hardest things, in my opinion, to get over because you have to teach yourself to look outside yourself (in terms of not being selfish), but look inside yourself and [learn] to shut off the rest of the world.”

[3:30] “It’s important to focus on ourselves and not worry so much about what everybody else is doing. But it’s also equally important to consider the rest of the world and not be so selfishly-focused that we forget other people exist.”

[3:55] “When we’re always looking outside at others, it feels like what we have isn’t good enough.”

[5:00] “We’ve really latched onto this idea that true ‘success’ is measured by how independent you are in terms of your work schedule… But that’s not necessarily true.”

[7:00] “I feel compelled to share the hard stuff, the nitty-gritty, the stuff that nobody really talks about just to be completely honest with you. Because I think we’ve glorified this lifestyle so much that people jump in thinking, ‘Oh, well this is easy.’”

[7:30] “I think we need to be really honest with ourselves about what it really means to work a freelance schedule or to have a creative lifestyle. Because there’s a lot that goes on behind the scenes that I don’t think people realize.”

[8:30] “What people don’t talk about is how freaking scary it is to actually pursue a dream or a lifestyle that isn’t the norm.”

[18:40] “Everybody makes mistakes. Everybody has moments of failure. Everybody starts or launches something, or jumps into a new career, or shifts from full-time 9-5 to full-time freelancing… Everybody has their ‘thing.’ And it doesn’t always go according to plan.”

[20:20] “It’s okay to talk about the ‘hard stuff.’ It’s okay to be transparent. It’s okay to talk about failures. And it’s okay to acknowledge that the world we live in is very much focused on comparison and trying to present our best selves…and it sucks sometimes. [But] it makes sense sometimes because we’re all trying to be the best. And the best way to be the best is to show the best. But don’t be fooled by that facade and don’t get into the negative habit of thinking that you’re the only person making mistakes.”

[21:55] “Everybody has moments of failure, and mistakes, and stress, and chaos. And part of really growing into yourself and into your role — creatively, personally and professionally — is owning those hard moments and saying, ‘It’s okay to have hard moments.’ And most importantly, pushing past those hard moments to create your success.”

To listen to other VulnerABILITY Podcast episodes, click here.